History of the Seven Villages

From Germany to Iowa an American dream come true

The history of Amana Colonies, a National Historic Landmark and one of America’s longest-lived communal societies, begins in 1714 in the villages of Germany and continues today on the Iowa prairie.

In the turbulent 18th century, Germany in the midst of a religious movement called Pietism, two men, Eberhard Ludwig Gruber, and Johann Friedrich Rock, advocated faith renewal through reflection, prayer and Bible study. Their belief, one shared by many other Pietists, was that God, through the Holy Spirit, may inspire individuals to speak. This gift of inspiration was the basis for a religious group that began meeting in 1714 and became known as the Community of True Inspiration. Though the Inspirationists sought to avoid conflict, they were persecuted for their beliefs. Eventually, the Inspirationists found refuge in central Germany settling in several estates, including the 13th-century Ronneburg castle.

Seeking Freedom
Persecution and an economic depression in Germany forced the community to begin searching for a new home. Led by Christian Metz, they hoped to find religious freedom in America and left Germany in 1843-44. Community members pooled their resources and purchased 5,000 acres near Buffalo, New York. By working cooperatively and sharing their property, the community, now numbering some 1,200 people, was able to carve a relatively comfortable living. They called their community the “Ebenezer Society” and adopted a constitution that formalized their communal way of life.

When more farmland was needed for the growing community, the Inspirationists looked to Iowa where attractively priced land was available. Land in the Iowa River valley was particularly promising. Here was fertile soil, stone, wood, and water enough to build the community of their dreams.

In 1855 they arrived in Iowa. After an inspired testimony directed the people to call their village, “Bleibtreu” or “remain faithful” the leaders chose the name Amana from the Song of Solomon 4:8. Amana means to “remain true.” Six villages were established, a mile or two apart, across a river valley tract of some 26,000 acres – Amana, East Amana, West Amana, South Amana, High Amana, and Middle Amana. The village of Homestead was added in 1861, giving the Colony access to the railroad.

Communal Life
In the seven villages, residents received a home, medical care, meals, all household necessities, and schooling for their children. Property and resources were shared. Men and women were assigned jobs by their village council of brethren. No one received a wage. No one needed one.

Farming and the production of wool and calico supported the community, but village enterprises, everything from clock making to brewing, were vital; and well-crafted products became a hallmark of the Amanas. Craftsmen took special pride in their work as a testament of both their faith and their community spirit.

Up before dawn, called to work by the gentle tolling of the bell in the village tower, the unhurried routine of life in old Amana was paced very differently than today. Amana churches, located in the center of each village, built of brick or stone, have no stained glass windows, no steeple or spire, and reflect the ethos of simplicity and humility. Inspirationists attended worship services 11 times a week; their quiet worship punctuating the days.

Over 50 communal kitchens provided three daily meals; as well as a mid-morning and mid-afternoon snack to all Colonists. These kitchens were operated by the women of the Colony and well supplied by the village smokehouse, bakery, ice house and dairy, and by the huge gardens, orchards and vineyards maintained by the villagers.

Children attended school, six days a week, year-round until the age of 14. Boys were assigned jobs on the farm or in the craft shops, while girls were assigned to a communal kitchen or garden. A few boys were sent to college for training as teachers, doctors, and dentists.

In 1932, amidst America’s Great Depression, Amana set aside its communal way of life. A ruinous farm market and changes in the rural economy contributed, but what finally propelled the change was a strong desire on the part of residents to maintain their community. By 1932, the communal way of life was seen as a barrier to achieving individual goals, so rather than leave or watch their children leave, they changed. They established the Amana Society, Inc. a profit-sharing corporation to manage the farmland, the mills, and the larger enterprises. Private enterprise was encouraged. The Amana Church was maintained.

Amana Colonies Today
Today the seven villages of the Amana Colonies represent an American dream come true; a thriving community founded by religious faith and community spirit. Declared a National Historic Landmark in 1965, the Amana Colonies attract hundreds of thousands of visitors annually all of whom come to see and enjoy a place where the past is cherished and where hospitality is a way of life.

Evocative of another age, the streets of the Amana Colonies with their historic brick, stone and clapboard homes, their flower and vegetable gardens, their lanterns and walkways recall Amana yesterday. But a vibrant community, celebrating both its past and its future, is here today for you to experience.

Gemuetlichkeit What does it mean exactly? It’s a difficult word to pronounce and it can’t be translated from German to English in just one word,… 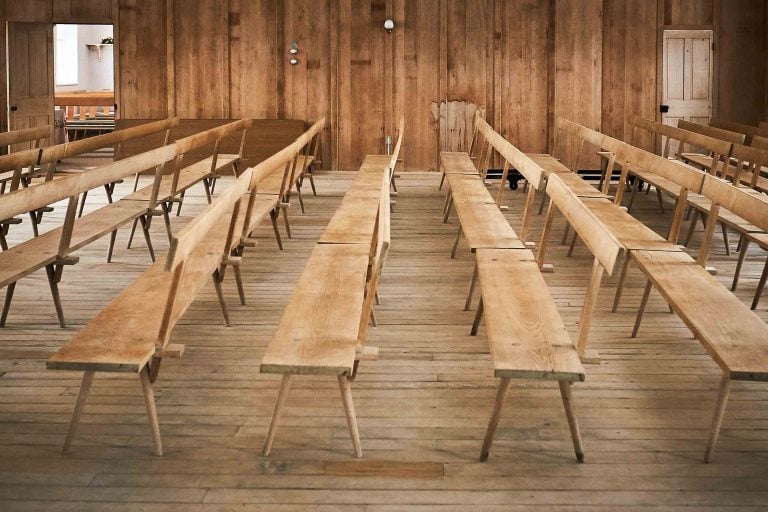